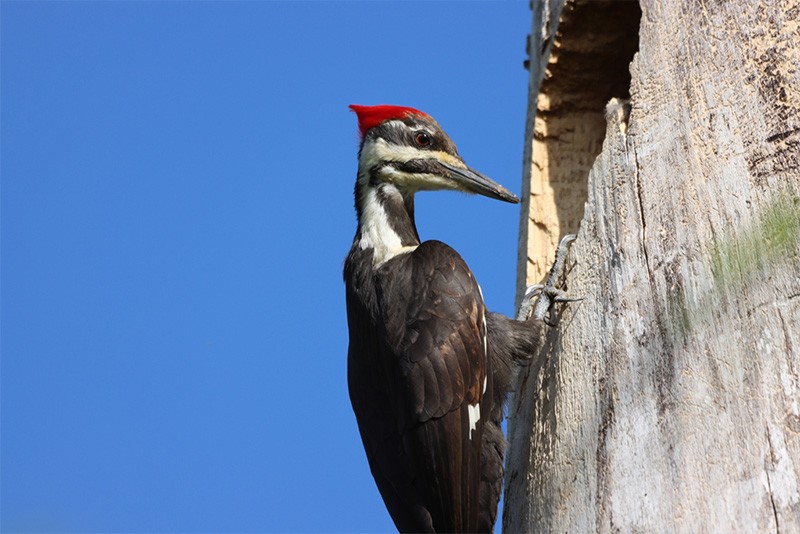 In October of 2019, a group of researchers published a study that examined the population trends of North American bird species over the last fifty years. While many bird populations have experienced dramatic declines during the last half century, one group that has actually shown population increases is woodpeckers.

Increased populations mean more opportunities to observe Pileated Woodpeckers in places where they might have once been considered rare, like suburban and urban habitats.

The male woodpecker began building its nest cavity in mid-April. It pecked away at the dead tree and then tossed chips of wood out of the hole with its beak. Peck-by-peck, and chip-by-chip, it worked to carve out the interior until its mate was ready to lay her eggs.

Once the eggs were laid, the male and female have taken turns incubating the eggs and guarding the nest. Both parents have a brood patch; a spot on their abdomen that allows their skin to come into direct contact with the eggs so they can transfer body heat to the eggs.

Before their shift change, the parent outside the nest flies to a number of trees in the vicinity of the nest tree and gives a series a calls to let the parent in the cavity know they are near. After calling, the outside parent flies to the tree and quietly ratchets itself towards the hole. As it gets closer, the parent in the cavity sticks its head out further and further until finally it launches itself from the hole, and the other parent peaks in and crawls into the hole and makes itself comfortable for its shift. These shift changes seem to occur at a set schedule. For example, I observed a pair in which the female would start calling around 5:00 p.m. and fly to several trees at specific times before finally flying to the nest cavity around 6:00 p.m., at which point the male would leave the nest so she could take over. 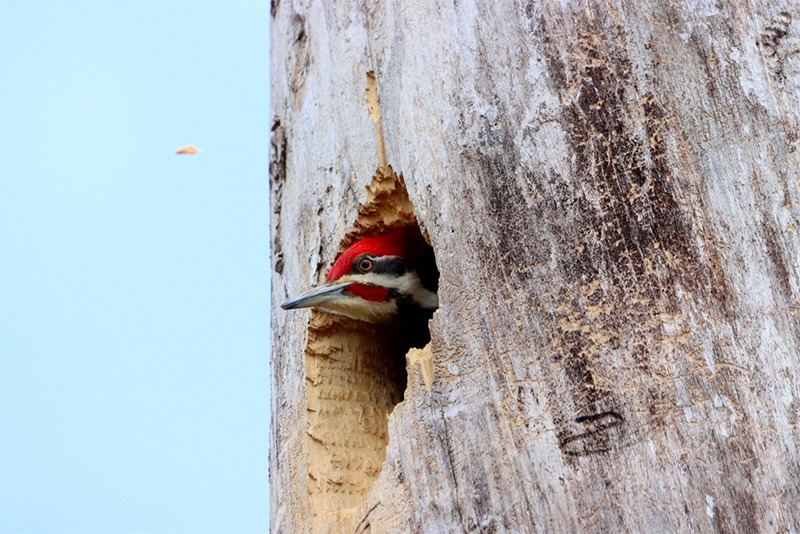 In spite of the long-term population increase, the Pileated Woodpecker population in Ohio seems to have peaked in 2014. In more recent years the population has shown a small downward trend.

Hopefully, as long as pairs continue to expand into new areas, build nest cavities and are able to successfully raise young we’ll continue to be treated to more and more encounters with this charismatic forest denizen. When I think osprey, I think of our trips to the wilder parts of the South Carolina coast or a trip we took to Florida a few years ago.