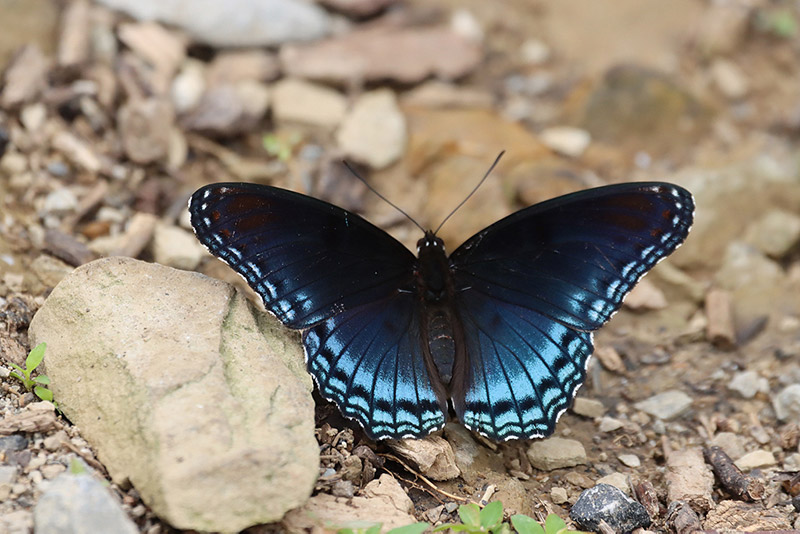 During a visit to Hoover Reservoir, near Galena, in mid-July I encountered one of nature’s more talented imitators, the Red-spotted Purple (Limenitis arthemis astyanax).

Red-spotted Purple larvae start out looking like frass pellets (frass is insect feces). As the larvae feed on the leaves of their host plant species—Black Cherry (Prunus serotina), Cottonwoods (Populus sp.), and Serviceberry (Amelanchier sp.)—they grow and start looking more and more like bird feces deposited on the surface of a leaf. Eventually, they pupate into something that looks like bird droppings dripping from a leaf. Talk about a “crappy” childhood.

Adult Red-spotted Purples emerge from their chrysalises as beautiful blue adults that are Batesian mimics of the toxic Pipevine Swallowtail (Battus philenor). Batesian mimicry is a type of mimicry where a non-toxic species resembles a toxic one to fool potential predators to leave it alone. The Pipevine Swallowtail obtains its toxicity by sequestering Aristolochic acid from its larval diet of host plants in the genus Aristolochia. The bright blue colors of the Pipevine Swallowtail are aposematic colors, or warning colors, to warn would-be predators that it’s toxic, and it’s these colors that the Red-spotted Purple has evolved to mimic.

Interestingly, in places where there are no Pipevine Swallowtails, the other sub-species of Limenitis arthemis, known as the White Admiral (L. arthemis arthemis) evolves to look like its white-banded ancestors, which are considered more cryptic and less conspicuous to predators.

To witness nature’s imitation game yourself, look for Red-spotted Purples along forest edges. Until you’ve had a chance to get-in and explore a high quality wetland it is hard to understand and appreciate the tremendous diversity of plant and animal species that thrive in a wet environment.