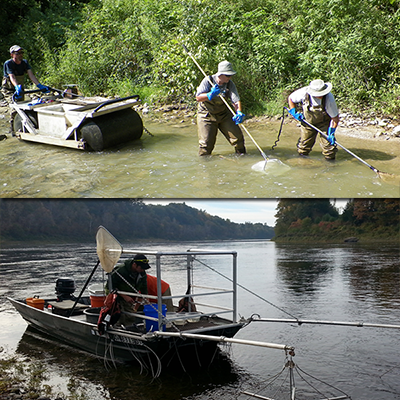 “Electrofishing” is one of the basic techniques MBI uses to sample fish in rivers and streams. It is one of several tools that MBI employs to assess the aquatic biota. Electrofishing allows us to put together an accurate picture of the fish assemblage in a river or stream. Electrofishing is a simple technique; it consists of creating an electric field in a small area of water in order to stun and immobilize fish for collection. Electric current is produced by a generator and is electronically converted to pulsed direct current (D.C.) by a “pulse box”. Direct current differs from household or alternating current (A.C.) in that it flows between a negative (cathode) and positive (anode) electrode. The current is pulsed 120 times per second and this produces an attraction to the positive electrode by the fish. Once collected, the fish are temporarily placed into a “live well” so that they can be more closely examined and identified.

When conducted properly, electrofishing has little, if any, adverse effects and the fish recover quite rapidly. Two modes of electrofishing are used. “Wading” methods are those in which the field crew wades in a stream while sampling. The electrofishing equipment is positioned on the shoreline or floated on a platform known as the “roller beast”. Sampling is done in an upstream direction with the crew carefully sampling all habitats over a stream reach of 150 to 200 meters. “Boat” methods are used in larger rivers that are two deep or wide to wade effectively. A boom extends from the bow of the boat and transmits electricity into the water. A netter stands on the bow and scoops up stunned fish. The boat method is done over a river reach of 500 to 1000 meters. Once the sampling reach is completed the crew records data on the catch identifying each fish to species, recording weights, and noting any signs of external diseases or parasites. Fish are released back into the water once the data is recorded. The data is later used to calculate indices such as the fish Index of Biotic Integrity that is used to rate the condition of each sample and site. Data about the number and condition of a species and how it is doing as a whole can also be derived. Electrofishing is an important tool that allows us to accurately conduct assessments of rivers and streams; without it our knowledge of the condition of our rivers and streams would be greatly limited.