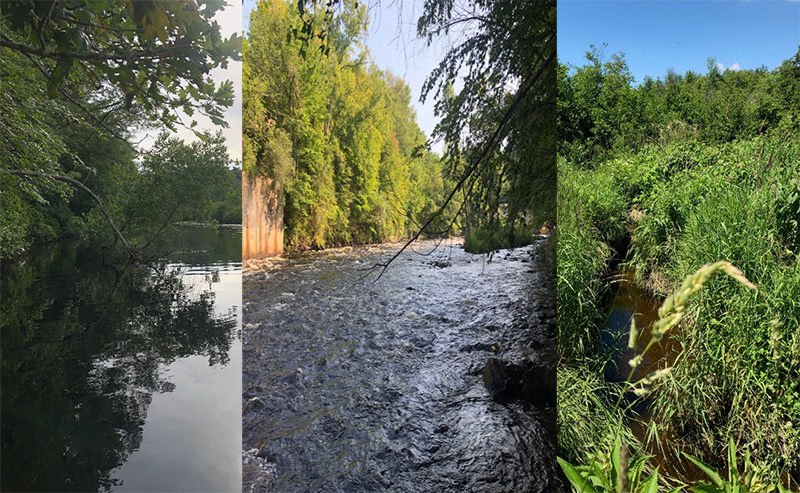 Aquatic ecosystems, particularly rivers and streams, are amongst the most dynamic and diverse habitats found on the planet. Five components of river and stream ecosystems are critical for maintaining ecological integrity: water quality, energy input, physical habitat, biotic interaction, and the flow regime. These five components are intertwined with each other, forming numerous complex relationships that allow these ecosystems to properly function. Aquatic organisms are adapted to specific, historical environmental conditions, with many species being sensitive to any changes that might disturb the historical norm. Much like a spinning top, these ecosystems rely on balance to persist. Unfortunately, in many watersheds, the five components critical to maintaining ecological integrity have been altered such that the equilibrium is disrupted and the threat of collapse is a real possibility. For example, the flow regimes of many rivers are not what they once were, with nearly half of the worldwide river volume fragmented or regulated (Grill et al. 2015). Of course, we rely on the services these systems provide us and life as we know it would not be possible without the utilization of such resources. However, considering any tradeoffs between conflicting human-use and ecosystem needs should still be a priority. In response to increased alterations, there has been an increased emphasis on stressor identification and ecosystem conservation. Midwest Biodiversity Institute (MBI) is proud to be one of many on the efforts’ frontline.

The U.S. Environmental Protection Agency (EPA), states, and tribes are currently conducting the third nationwide survey of the condition of rivers and streams in the lower 48 states. The National Rivers and Streams Assessment 2018 – 2019 (NRSA) is one of a series of surveys evaluating our nation’s waters, with the three others assessing the condition of lakes, wetlands, and coastal waters, one every five years. MBI has participated in 6 of these national surveys. Examining key indicators such as ecological, water quality, and recreational, the NRSA survey is designed to estimate the percentage of rivers and streams that are in good, fair, or poor condition. The assessment provides key information useful for estimating the current status of the five components that maintain ecological integrity in these ecosystems. Such a large scale project requires an equally large effort. Many state environmental and natural resource agencies, federal agencies, universities and other organizations (e.g., MBI) are involved with this collaborative assessment.

Over 1800 sites on rivers and smaller streams, were selected to represent the condition of our nation’s lotic (actively moving water) systems. Each site was randomly selected and serves as a surrogate for the population of rivers and streams in its respective ecological region, where climate, ecological features, and plant and animal communities are similar. Field crews are trained on specific collection protocols that are standardized nationwide. Standardized collection methods allow for comparisons to be made among sites. Crews conduct many measurements of both instream and out of stream habitat parameters. Water samples are collected from each site to be analyzed for various nutrients, toxins, bacteria, and more. Field crews also measure the water temperature, dissolved oxygen, pH, and conductivity at each site. In order to evaluate the different types and abundance of fish species in each river or stream, crews typically conduct standardized electrofishing surveys. The fish collected during the survey are identified, measured, recorded and then typically released unharmed. A few individual fish are retained as vouchers from pre-assigned sites and submitted to regional fish taxonomists as part of a quality assurance/quality control plan. The quality assurance process ensures each fish species is being accurately identified. Tissue samples from fish species that are commonly consumed by humans are also retained and sent to a laboratory where the tissues are assessed for various toxins. Mercury, for example, is a toxic compound that can be concentrated in fish tissue. Long-lived species that are high in the food chain contain higher concentrations of mercury than others, and are more often used for tissue analysis than species lower in the food chain. Macroinvertebrates are collected from sites using a modified kick net. Although typically small, macroinvertebrates are very important for maintaining food web interactions and include animals such as insect larvae, snails, and crayfish. Additionally, the presence or absence of certain taxa can be an indication of water quality. The macroinvertebrates collected from each site are preserved and sent off to be identified by taxonomic group.

MBI sampled 46 sites in 2018 and will sample 58 sites in 2019. Our sites are in 5 states: Maine, Massachusetts, Connecticut, Rhode Island, and North Carolina. As mentioned above, sites are randomly selected so there is no site too big or too small included. The length of a sample reach is directly related to the width of the particular river or stream, with a maximum and minimum reach length of 4 kilometers and 150 meters, respectively. The rivers that are sampled can be as wide as 2 miles or small enough to step across. However, half of the sites selected for this national survey are considered “rivers”, while the other half are considered “streams”. Data for individual rivers and streams will be made available to the public as part of a final report, anticipated to be available in 2021.

Identifying rivers and streams across the United States that may be at risk is the first step. In order to address any issues, the causes of impairments must first be evaluated and identified. By evaluating what waters may be impaired, management objectives can be assigned with greater confidence. Typically, an adaptive management plan consists of assessing the current conditions, identifying the problem if one exists, state the desired objectives, develop and implement a plan, monitor and evaluate the results and adjust the plan if needed. It is not the end goal of the NRSA project to complete all of the outlined steps above, but rather to add to the foundation of data which can be utilized by resource managers and agencies to make better management decisions. The field days are long, the physical labor is difficult, but the work and results are both rewarding and essential to ensuring that the ecological integrity of our nation’s rivers and streams remain in balance.