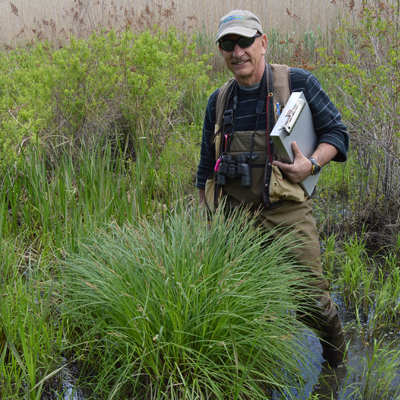 by Pete Precario on November 16th, 2016
Until you’ve had a chance to get-in and explore a high quality wetland it is hard to understand and appreciate the tremendous diversity of plant and animal species that thrive in a wet environment. I recently had the opportunity to explore some high quality, Category 3, wetlands located in Geauga County, Ohio with our MBI Wetland Ecologist, Mick Micacchion. The wetlands in parts of northeastern Ohio are still quite extensive and relatively undisturbed. The plant diversity in the wetlands was astonishing to me. In particular, the sedges which were a large part of the plant community in areas grabbed my interest. Sedges are a common family (Cyperaceae) of wetland plants and they were extensive in the wetlands we were assessing. A number of sedges prosper in these saturated soils. Sedges are grass-like plants, distinguishable from grasses by their triangular stems. One of the more interesting sedges we saw was the Tussock Sedge, Carex stricta. They are usually found at or just above the water level. The Tussock Sedges are interesting because they create their own environment by growing in clumps above the water level and can be at times about two feet in diameter. As their stems die off, they build up around the base of the plant creating their own clumps of soils or “tussocks”. The flowers which bloom in May and June are reddish brown. The seeds are a food source for numerous wildlife species including Mallards, Wood Ducks, Turkey, Cardinals, Juncos, squirrels and others. Deer eat the leaves and moles apparently will eat the roots. Tussock Sedges spread by both seed and rhizome. As a result, when you find one Tussock Sedge you are likely to find an associated colony. The colonies often create small, protected pools of water that provide habitat for frogs, salamanders and insects. Apparently other plants, such as ferns, can grow directly in the sedge tussocks. Blair Prusha has worked with MBI for the past 9 years. His primary focus has been on macroinvertebrate surveys, although he has also done GIS work, helped with fish surveys, and jumped in on a multitude of other projects.