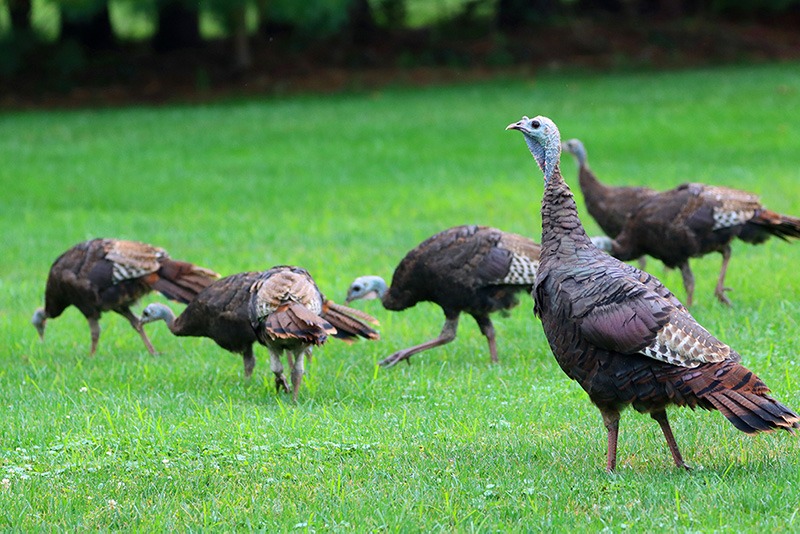 Wild Turkeys have become a relatively common site throughout Ohio’s forests and farmlands, but according to the Ohio Division of Wildlife, they were extirpated from the state by 1904 due to deforestation and intensive agricultural practices.

In late summer and early fall, adult females and their chicks will travel in family groups. The adult female guards the chicks, also called poults, and helps them find food. Often, family groups will join together in larger flocks. When this happens the members of these groups will establish a hierarchy of individuals of different ranks, or a “pecking order,” if you will.

I was fortunate enough to see this female escorting her poults as part of one of these family groups in rural eastern Delaware County in mid-September. The adults stood watch while the young worked on foraging for seeds and insects.

The small bump just above the bill of the female is called the snood. In male turkeys, the snood can become engorged with blood and gets considerably longer during courtship displays. The blood also causes the snood to take on a reddish appearance. Watch for these courtship displays to begin in January and February throughout Ohio’s forests.

Perhaps as we give thanks this fall, we should also be thankful that Wild Turkeys have returned to Ohio as the result of successful conservation programs. After working tirelessly (well maybe occasionally tired) as a biologist and conservationist for nearly 50 years, Roger Thoma has retired, again.