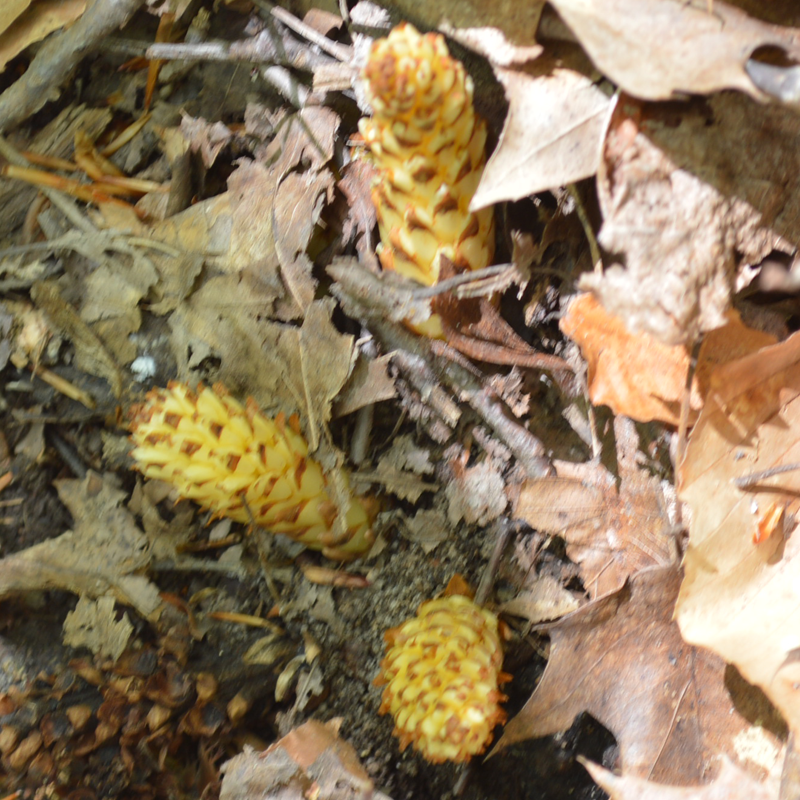 One of the most interesting plants I recently stumbled upon – literally – in northeastern Ohio is the American Squawroot (Conopholis americana). It goes by a number of common names including cancer-root and bear corn. It is an achlorophyllous plant, a big word that simply means that it doesn’t have any chlorophyll. Consequently it is not green and doesn’t photosynthesize any of its own food. Individual plants are from 4 to 8 inches tall and often well camouflaged by leaf litter.

Because it doesn’t produce its own food supply, Squawroot is a true parasitic plant. It is parasitic exclusively with oak trees and feeds off of their roots. At the point where the Squawroot attaches to the oak root a nodule or lump often forms leading to one of its common names -“cancer-root”. Unlike a lot of parasites, it does not do any apparent damage to the oak tree host and appears to live in harmony and balance with its food supply.

Because it blooms early in the spring, it is also reputed to be a favorite food of bears just coming out of hibernation. This is the apparent source of another of its common names – “bear corn”. Squawroot apparently does have some astringent medicinal properties. Reputedly it has also been used in tea or concentrated form for relief of headaches and pain.

The genome of the Squawroot has been sequenced. Interestingly, the genes related to photosynthesis are missing while the rest of the genome is largely similar and consistent with other vascular, seed-bearing flowering plants. This leads some to the conclusion that there was a genetic mutation responsible for the current dramatic nature of the plant.

While there are no flowers apparent on the pictured plants, Squawroot is a flowering plant. It produces seeds that work their way into the ground looking for oak roots rather than growing toward the sunlight. If you’re lucky enough to encounter the Squaw root stop and take a close look. It is a remarkable plant. Dublin Students Get a Glimpse of Aquatic Ecology

4th and 5th grade students at Daniel Wright and Riverside Elementary Schools in Dublin were shown real world examples of aquatic ecosystems, organism interactions and the invasive species that can disrupt their balance.