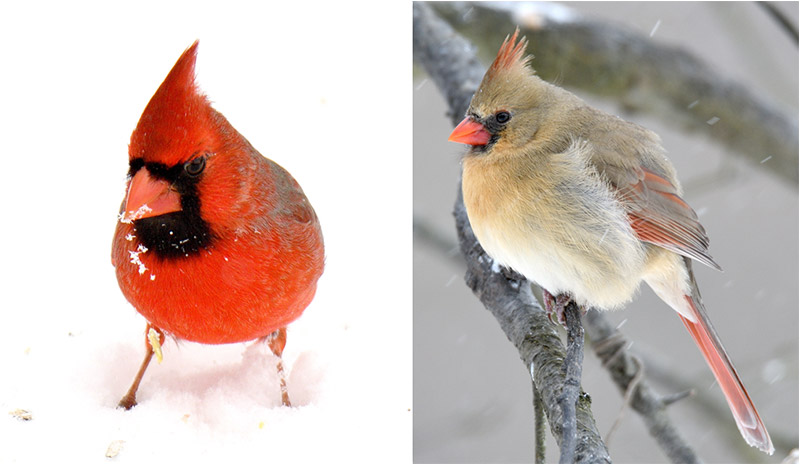 The Northern Cardinal (Cardinalis cardinalis) has standout plumage. The male is bright red from the crest on his head to his tail. The bright red is accented with a black mask and beard, an orange bill and pinkish-brown legs and feet. His back has some gray, which in some individuals gives them a scarlet and gray look. The female is similar with more muted colors and a lot of buff and green mixed in, which makes her harder to spot in the brush. Juvenile cardinals (April – September) are buff/greenish like females but they lack red plumage, and they have a black bill. A native of Ohio, they were reported as hardly known in Ohio in 1830. By the early 20th century, they were common, and were reported in all 88 counties of Ohio in the most recent breeding bird survey.

Year-round residents, Cardinals begin finding mates in early spring, often making their song the first one heard in the year. The pair will have two, possibly three broods in a year. Once paired up, they will find a nesting site in shrubs and less often in trees. Each brood will typically be made up of 4 off-white speckled eggs, which hatch within two weeks and fledge in another 10 days. The parents feed the nestlings insects and other invertebrates in the first weeks, and later taking them along foraging.

The Pumpkinseed Sunfish (Lepomis gibbosus) is a member of the sunfish family Centrarchidae, and is a frequently encountered species in many of our survey sites around the Chicago area.