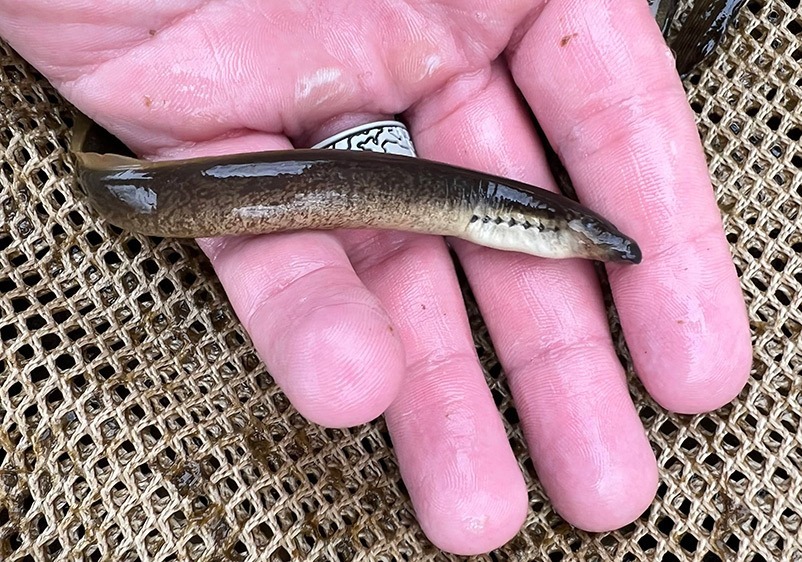 Adult Northern Brook Lamprey occupy small to medium-sized streams and clear brooks. They prefer riffles with swift current over clean sand and gravel substrates. The ammocoetes live in larger streams where they burrow into soft substrates at the stream edge. The feeding habits of the Northern Brook Lamprey is quite interesting. As ammocoetes, they filter feed from the water that passes over them while buried in the sediment. As adults, they do not feed and actually just live long enough to reach the breeding season.

Here in Ohio, their spawning season typically occurs from late April until mid-May. Adults make migratory “runs” into the clear brooks and small streams. When ready, adults excavate small, circular depressions in the gravel riffles by moving stones with their oral disks. As many as 7-8 lamprey can be seen digging a single pit. To spawn, one male attaches to the head of a female while other males cling to nearby rocks or the body of another male. This action often forms a mating ball, which resembles that of some snake species. Once mating is done, the adults die and drift downstream where they lay on the bottom as “fairy necklaces.” The following ammocoetes will live in the substrate for 4-6 years!

Northern Brook Lamprey are endangered in the state of Ohio but are a species of least concern according to the IUCN. Their range expands across the Great Lakes region, the upper Ohio River basin, and the Missouri River basin. There are sporadic sightings of this fish in Big Darby Creek but in other central Ohio tributaries they haven’t been seen since the 1960’s! This article was inspired by the finding of an individual found by the author in Big Darby Creek, which was the first report in 20 years.

Fun fact: the Northern Brook Lamprey is thought to be an evolutionary offshoot from the Silver Lamprey, which is a parasitic species. The Eastern Spiny Softshell Turtle (Apalone spinifera) native range is as far west as Montana in the Missouri River drainage to as far east as eastern New York and as far south as Mexico.