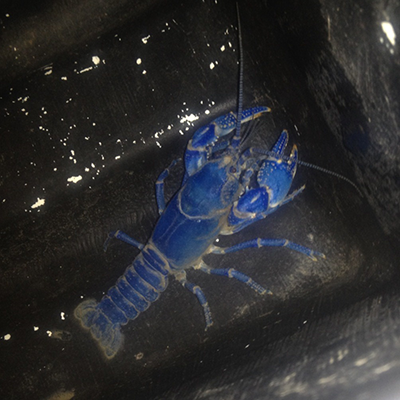 by Blair Prusha on November 16th, 2016
In the summer of 2012 I worked as a macroinvertebrate and fish crew field technician for MBI. However, I was assigned to take two week-long trips to Virginia with Roger Thoma, a crayfish specialist and Senior Research Associate at MBI. I expected we would be visiting stream sites in the region collecting crayfish from streams. I quickly found out that assumption was dead wrong; instead, we visited spring seeps in the crevices of the Appalachian Mountains. The crayfish we were after were actually burrowing crayfish that live far away from any stream. We dug into the seeps with our bare hands, often times up to our shoulders. It was messy work with mud getting all over the place. We felt into the burrows with our fingers and dug them out one handful at a time, but the reward was a huge payoff. These crayfish were spectacularly colored bright blue or orange. Every once in a while one of them would stick its colorful head out to see what was going on and that’s when we’d grab them up. The blue ones were Cambarus monongalensis, and the orange were Cambarus dubius. Beautiful organisms. I will never forget my trips with Roger that summer. During a visit to Hoover Reservoir, near Galena, in mid-July I encountered one of nature’s more talented imitators, the Red-spotted Purple .