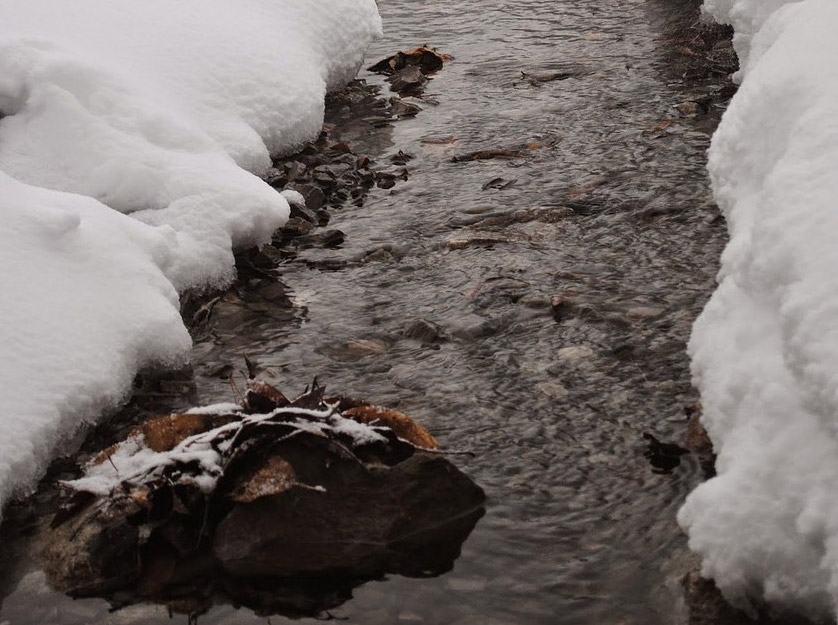 As we are seated in our well-heated homes or by a roaring fire-place this winter, we may wonder what is happening in our local small streams and in particular to the fish and other organisms that inhabit these waters. While some larger fish may move downstream to pools in larger streams and rivers, many fish and invertebrates remain in these smaller brooks and creeks year-round, although many become much less active. Fish and invertebrates are cold blooded and many become more sedentary and sluggish. I have sampled small streams into December in Southern Ohio and have captured near the same numbers of species that I did in summer and fall, though the fish swim more slowly and are more likely found in undercut banks, under rocks, or in root-wads and other cover (which is why these habitat features are so important in streams). In late fall in Michigan during a study, I observed a smallmouth bass turn sideways to slip underneath a boulder! While some aquatic animals (e.g., turtles and frogs) hibernate, fish do not, and instead go into a state where they lower their heart rate and do not eat or excrete waste, but still need oxygen to survive.

Another feature not immediately obvious or even visible is the presence of groundwater seeps and springs entering into streams, which can provide a refuge for fish and other organisms from the severe cold. The temperature of groundwater is usually equal to the mean air temperature above the land surface, thus areas where groundwater seeps into streams can provide temperatures well above surface water temperature in winter. Fish are known to seek such spring-areas during winter and summer. In summer, groundwater provides a cooling effect from summer warming, and protects species that prefer cool water (e.g., dace, sculpins). A unique characteristic of water is that when frozen it is less dense than when liquid, and it floats. This aspect is critical for aquatic life, for if water bodies froze from the bottom up, stream habitat features would become largely un-inhabitable for organisms. Many fish and invertebrates live under and among the gravels and cobbles in the stream bottom and are partially protected during most winters. In extremely cold periods (e.g., below 20F at night), turbulent flows in riffles and runs can result in super-cooled water that creates slushy ice crystals called "frazil" that sometimes can stick to the bottom as "anchor" ice that can build up and reduce available habitat, forcing fish to move to other areas. Hard winters can be tough on aquatic life!

In addition to nature's extremes, people also have their effect on nature, even in winter. Urban areas where there are a lot of "impervious" surfaces (i.e., roads, concrete, roofs, parking lots) pose a particular hazard for aquatic life in winter. Heavy rains or snow melt can add to this resulting in high water, and "scouring" of streams can occur when fish and insect larvae are relatively inactive causing damage or death to animals in vulnerable habitats. Another problem in urban areas in late winter and spring is high levels of road salt (NaCl) that can wash into streams creating toxic conditions and contaminating soils and groundwater. Salt has been building up annually in Northern urban streams creating the "salinization" of waterways that eventually could make such waters unfit for sensitive aquatic life.

Although winter to can be harsh, some organisms actually rely on and thrive in the colder months. "Winter Stoneflies" (Family Capniidae) are so named because they emerge and mate during the winter months and can sometimes be found crawling on the snow near streams. They have the opposite strategy of most aquatic invertebrates in that the nymphs burrow into the stream bed and become inactive in summer, rather than in winter. A perusal of the vast Ohio EPA/MBI data records finds 50 records for this family in Ohio streams with only 4 of these records occurring from June through August. There are also species of midges (Chironomidae) such as the genus Diamesa, that emerge during the winter.

In reality, we know much less about the habitat and behaviors of aquatic life in winter than we do during warmer periods. We generally study fish and other aquatic life from spring through fall when organisms are most active and pollution events are most limiting, which coincides with when the weather is much warmer. The logistics of winter sampling can be challenging at best and dangerous at worst (e.g., ice, hypothermia). I think I'll throw another log on the fire... A Retrospective on the Clean Water Act in Ohio: Is Today As Good As It Gets?

The quality of Ohio’s rivers and streams has improved tremendously from the grossly polluted conditions that were commonplace in the 1940s, 50s, and 60s.