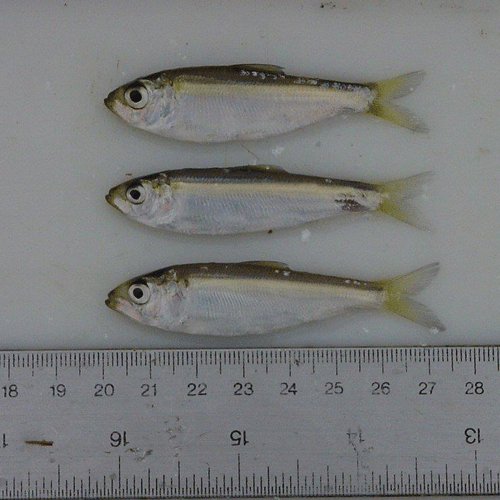 by Chris Yoder on November 16th, 2016
MBI has sampled the fish assemblages in the lower Kennebec and Sebasticook Rivers in central Maine since 2002. The purposes of this project are to develop a consistent sampling technique for riverine fish abundance and to monitor the effectiveness of efforts to restore diadromous fish populations. Diadromous fish species are a prominent part of the Maine riverine fish assemblage and are the focus of restoration and recovery efforts by multiple state and federal agencies. A diadromous species migrates between fresh and salt water to complete parts of its life cycle. Species that spawn in freshwater and then emigrate to salt water to mature are termed anadromous. Species that spawn in salt water and then migrate to freshwater are termed catadromous and are represented in Maine by American eel. River herring are anadromous and include three species - alewife, blueback herring, and American shad. Populations of these species have declined due primarily to a lack of access to their spawning rivers and lakes due to dams constructed in their natal rivers in the late 19th and early 20th centuries. Efforts to improve access by these species to their historical spawning habitats include improving their "passage" around dams by transporting fish directly, installing fish ladders and lifts at dams, and the outright removal of selected dams. In the Kennebec and Sebasticook Rivers a combination of these strategies is being employed. The Edwards Dam on the Kennebec River in Augusta, ME was removed in 1999 which restored eleven miles of formerly impounded river to free-flowing riverine habitat and opened a total of 17 miles of freshwater to access by diadromous species. The benefits were almost immediate and included a nearly five-fold increase in fish biomass and numbers including that of native freshwater species. The Ft. Halifax Dam at the mouth of the Sebasticook River in Winslow, ME was removed in 2008 and restored 3 miles of impounded river to natural riverine habitat and provided a direct connection with the Kennebec R. Fish lifts were installed at 3 upstream dams which provided access to historical spawning habitats for river herring. Our 14 years of annual sampling in the Kennebec and its tributary, the Sebasticook R., have shown remarkable increases in the number of river herring. The increases were most notable following the Ft. Halifax dam removal in 2008 and the corresponding installation of fish lifts at upstream dams in subsequent years. Sampling conducted on October 13-14, 2014 revealed the highest catches of river herring in 13 years consisting of 10,000s of individual fish on their "outmigration" to the sea (see photo inset). Alewife spawn mostly in lakes and ponds that are connected to the Sebasticook and Kennebec Rivers by small tributaries - what we observed in October 2014 was the outmigration of young-of-year fish spawned in May and June. Blueback herring are spawned in rivers and their outmigration coincides with the alewife. These data plus the increased the passage of adult spawning fish in the spring are compelling proof that the restoration efforts have indeed been successful. Sustaining this success depends on the maintenance and further expansion of access to historic spawning grounds.