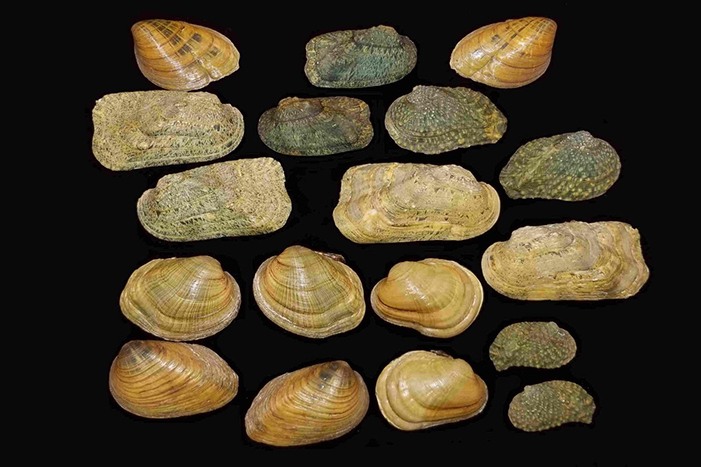 Freshwater Mussels in the Midwest - Part 1

Are the mussels in this photo just “living rocks?”  Or are they perhaps excellent indicators of the long-term health of our streams and rivers?  Have you seen freshwater mussels in your local stream or lake and wondered what they were?  Many people have seen the non-native invasive Asian clam (Corbicula fluminea) scattered on a sandbar, but few have seen many of the 60 species considered to still exist in Ohio. These “bivalve” animals have an exoskeleton of hard calcareous shell made from minerals from the water.  They dig themselves into stream bottoms and do a great job of anchoring themselves and hiding from humans and predators, commonly buried with less than a half-inch of the shell showing.   They have a complicated life cycle that involves another species – a fish – to reproduce and disperse.  It’s no wonder most of us know so little about them. 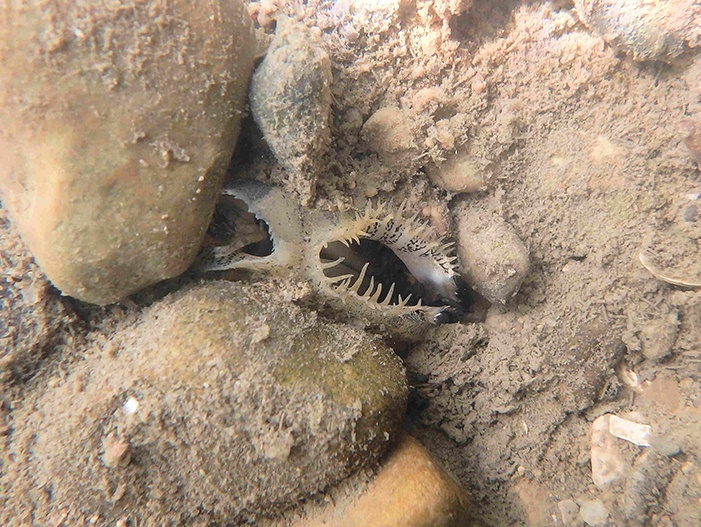 Figure 2. A mussel, well-hidden among rocks and under sediment, with just its two siphons showing.  These siphons draw in water and food, and excrete waste.

This lack of awareness and attention has had consequences related to the survival of the 300 or so species of mussels recorded in North America.  One-third of these species are in trouble; mussels are among the most threatened group of aquatic animals in our waterways throughout this continent and the Midwest.  In the U.S., around 70% of species are already extinct, or are endangered/threatened and granted special status under the Endangered Species Act and state laws.  The southeast U.S. (e.g., Alabama and Tennessee) and the Ohio River basin are the “hotpots” for mussel diversity in the country.  In Ohio, 36 of the state’s 60 species are listed for legal protection purposes by the Ohio Department of Natural Resources, and US Fish and Wildlife Service.  Seventeen species are extinct or extirpated from Ohio – no longer found in the state.  Twenty-seven of Wisconsin’s 50 mussel species are listed.  About 30 of its original 50 species can still be found in the Mississippi River.

Some mussel taxa or species have been around for geologic periods of time (thousands to millions of years), and have occupied glaciated Ohio for maybe 10,000 years.  Species still found today have been excavated from thousand year old earthen mounds of Native Americans, who used them as tools and ornaments.  But since the 20th century, species and populations have seen declines that have decimated many.  This has happened even as fish have benefited greatly from the many improvements under the Clean Water Act and other conservation measures.

Mussels have tough lives.  Because they tend to move very short distances, maybe only a few feet in their lifetimes, mussels cannot easily escape the multiple stresses that they encounter in a stream.  Pollution, dams, levees and other habitat alteration, disease, invasive species, flow alterations and other insults are the reasons usually given for the decline.  In the 1800s and first part of the 20th century, a button industry harvested millions of mussels from along the Ohio River and tributaries, severely reducing numbers and diversity, eventually leading to stringent laws protecting mussels from poaching and even casual removal.  Mussels are still harvested in Alabama and Tennessee, supporting a cultured pearl industry in Asia, where pieces of North American freshwater mussels stimulate the growth of cultured pearls when inserted into oysters. 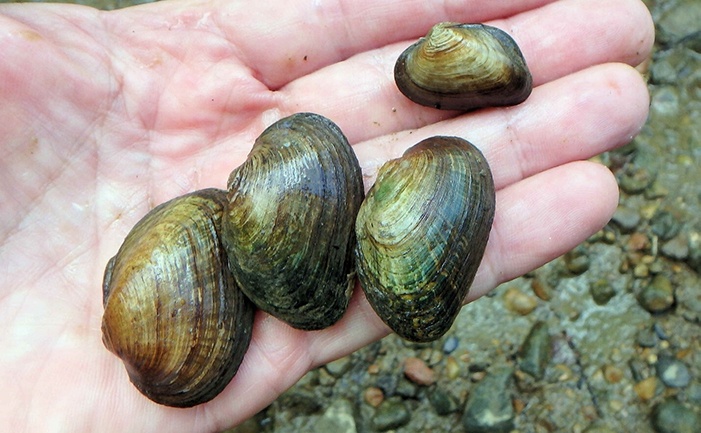 Figure 3. One reason freshwater mussels are so hard to find is that some species are so small.  These specimens are called adult slippershells (Alasmidonta viridis).  The species occurs across Ohio, and its small size makes it somewhat elusive and means it might be in more sites than have been recorded to date.

Mussels need more attention, and they really need our help to survive.  In future Articles, we’ll cover some other examples of mussel issues such as conservation efforts, and highlight some species that are interesting because they are either rare or common, and talk about what is being done to save them.

Check back soon for Part 2 of this Freshwater Mussel Series of Articles.